On April 25, the Federal Service for Surveillance in Healthcare (Roszdravnadzor) held a board meeting to summarize its performance in 2018, including the release of data on the registration of medical devices. Since Government Decree No. 1416 entered into force in 2013, the number of registered devices has varied highly from year to year, as we mentioned last year at the Raifarm Conference on September 25 (http://raifarm.com/news/press-releases/medical-device-regulation-russia-eaeu).

The published Roszdravnadzor data is available in the Service’s video (https://youtu.be/VYQOQS7_VvY). 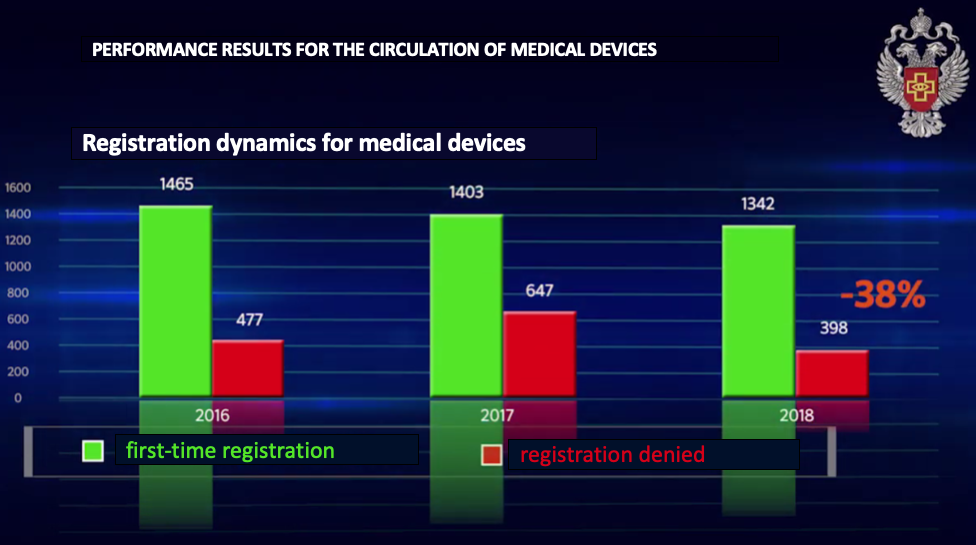 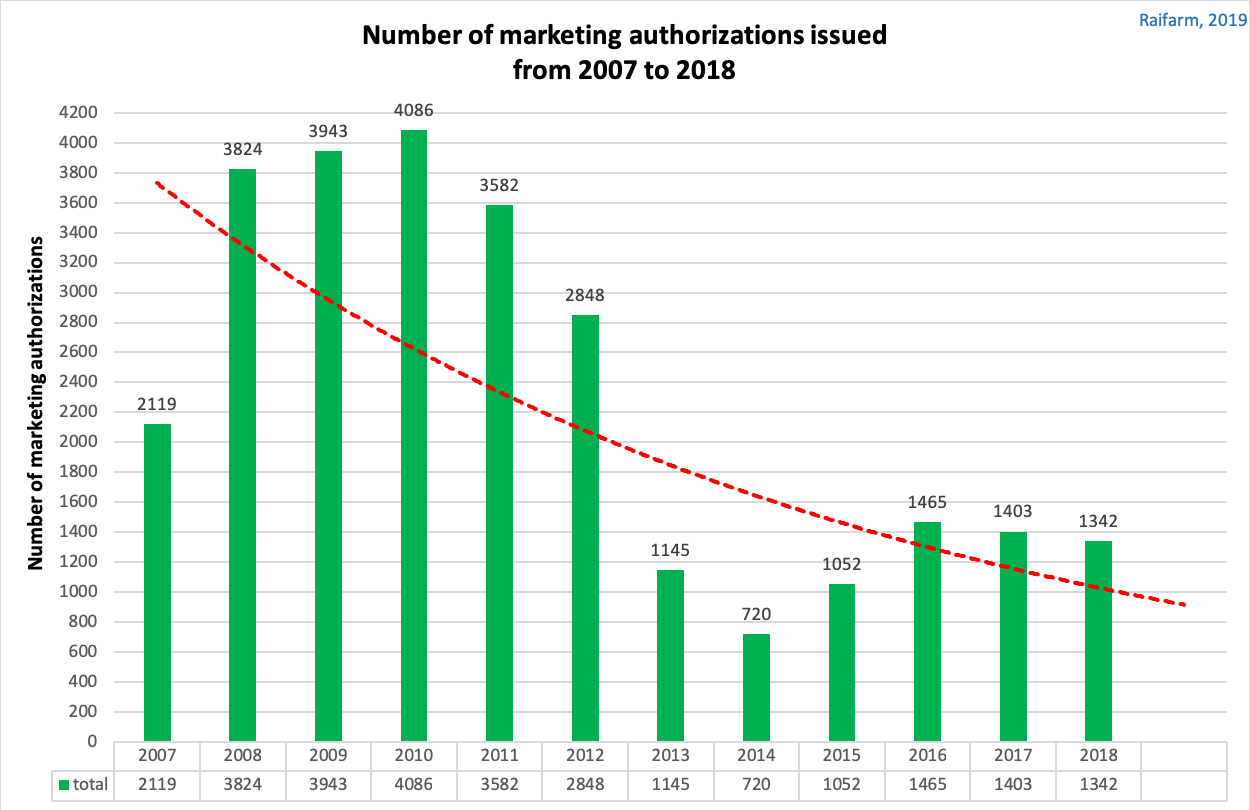 The video does not mention the causes of the decline in the number of marketing authorizations issued, but it can be assumed that the increasing complexity of regulatory requirements is a major cause. Expert requests to provide documentation and information continue to grow in complexity, and require considerable efforts to prepare a comprehensive response.

The requests focus primarily on technical, operational, and regulatory documentation, which must provided with the utmost precision. Inconsistencies in the technical documentation provided by manufacturers are another reason for issuing requests. Applicants have to spend considerable time looking for such inconsistencies, which can happen for many different reasons. The most common causes are simple typos or cases when manufacturers supplied a document for a previous version of the medical device. Experts also frequently issue requests for device labeling and packaging, and also require stability and aging test results for devices with an expiration date. Regulatory specialists are required to have an ever-increasing knowledge of this field and learn to navigate the tangled web of bureaucracy in registration-related legislation. 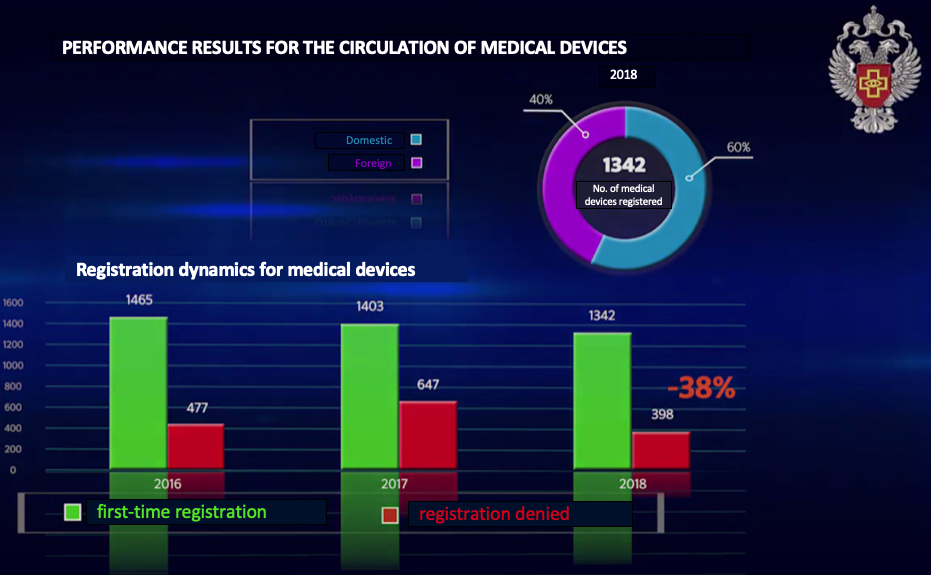 The domestic/foreign ratio for medical devices is 60%/40%, respectively. In absolute numbers, this equals 805 registration certificates issued for domestic products and 537 certificates for imported products. No information is provided in the video on the numbers of medical devices registered per risk class. 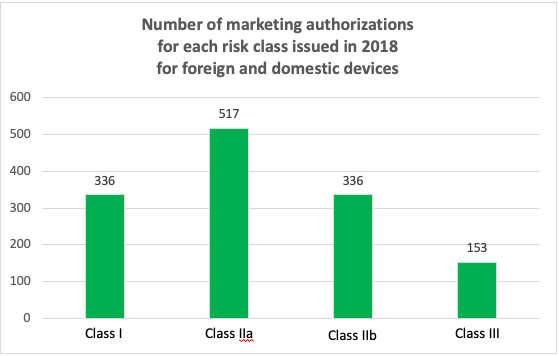 A 38% decrease in the number of registration denials in 2018 compared to 2017 is also noteworthy, although this is likely determined by the fact that many registration dossiers are returned to applicants at the first stage of examination before reaching the “substantive examination” procedure, rather than the efficacy of Roszdravnadzor’s new “simplifications.” For example, we may recall some applicants’ recent complaints regarding requests to provide license agreements for trademarks, which in some cases is simply impossible. The situation is the same with requests related to particular aspects of devices and the economic activity of companies, which confuse many foreign manufacturers. In both cases, the registration process reaches a dead end and the application file is returned to the applicant. Returning documents in this manner is not considered a registration denial. 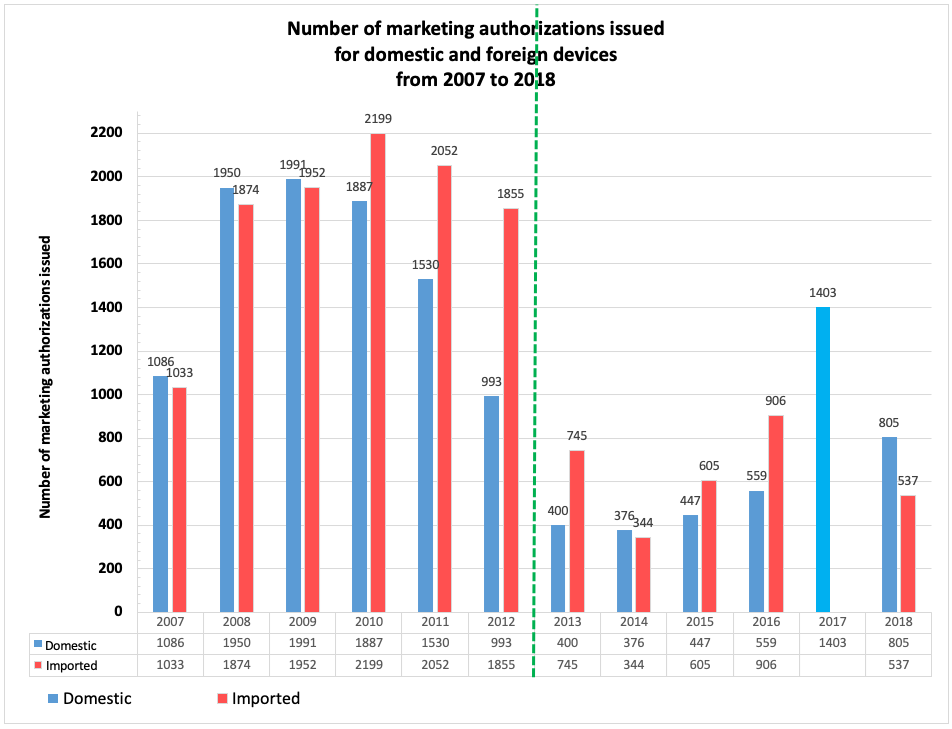 Overall, although the registration procedure for Class I medical devices and IVD was simplified in 2018, the regulatory environment related to registration still remains complex.